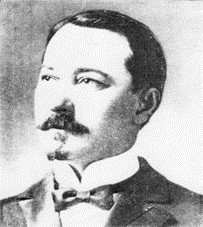 Physician and Mayor of Hull

Note: We wish to thank the author of this text who graciously allowed us to publish it here in an English version.

“[…] Joseph-Urgel Archambault, son of Dr. Damase-Eusèbe and Elmire Méthot, was not from Hull, but from Saint-Pierre-les-Becquets, where he was born on June 22, 1872. […]

“Joseph-Urgel was thirteen years old when he arrived at the Seminary of Nicolet to study. He remained  there from 1885 to 1891. He then  went on to study medicine at the Université Laval. Where he graduated in 1896. He settled in Hull in the month of September of that same year. […]

“Upon his arrival in Hull, the young 24 year-old doctor-surgeon started by taking care of his career. He opened an office on Leduc Street, […] that was destroyed during the fire which engulfed a large part of the city in 1900. He then moved on Charles Street (now Frontenac) until he had a superb house built with an adjoining office in 1905, on Main Street (du Portage). […]

“Long gone is the time when the doctors made house calls in a horse drawn carriage! Doctor Archambault had a horse, Jos, that he kept until 1922 even if he had bought an automobile in 1920. For two years, the horse grazed  on Courcelette Street, and later on Wright Street, and finally at Lake Leamy where the family would come and visit on Sundays.

“Back then, no need for a receptionist or an appointment to see the doctor. The maid or the children would meet the patients or take the calls, most of them requests for counsel on diseases. No Medicare card either. The doctor did his accounting himself and did not send any bills, counting on people’s honesty. “If they don’t come to pay me, he used to say, that’s because they’re not able to.” When he died, his family found books full of unpaid accounts.

“Apart from of his daily work, Joseph-Urgel was active as a member of many professional associations. He joined the Medical Association of Hull County as Director, when it was founded in June 1901. In 1922, he was Governor of the Doctors and Surgeons College of the Province de Québec for District 13; he also was the Head-doctor for the Union Saint-Joseph du Canada and remained the local President of that society during 14 years. He was the President of the Medical Association of the Hull district, President of the Sanitary Congress of the Province of Québec in 1919-1921, and Examiner of the National Alliance and of many societies and insurance companies.

“While he was building his clientele base, the young man thought about having a family of his own. On August 23, 1898, he married in Joliette Marie-Rose Olivier, daughter of Justice L.-A. Olivier, former Senator for Lanaudière. The couple had seven children (four died at a young age). The eldest, Olivier, born on July 18, 1902, returned to the family roots in Saint-Pierre-les-Becquets in 1927. […] Térèse – Marie Thérèse Rose Elmire, being a great admirer of Térèse d’Avila, insisted her name be written that way, with no h – was  born on April 29, 1904.  She became famous because she was the first secular woman in North America to obtain a Ph.D. in Scholastic Philosophy; she was also granted a scholarship from the Province of Québec to study at the École catholique de Bruxelles and in Paris.  Finally, Marguerite, born on December 17, 1911, was married to Paul Ardouin.

“The doctor – who became a widower in 1925 –  then married Miss Albina Massé, sister of the mother-in-law of his daughter Marguerite. The father thus became the uncle of his daughter! The couple left the area from 1930 to 1935, and they came back to Hull where the doctor bought his last house at 17, Nicolet Street […]. That’s where he died at 69 years old, on September 12, 1941, after having suffered from a terrible disease during three years.

“A cheerful-natured person, this gentle and calm man, was extremely well read. He possessed a significant collection of books and liked to read anything and everything without having a favourite author. He liked newspapers also, Le Devoir among them. […]   and he never said no to a game of bridge, of whist or  of 500. He liked to travel and would attend regularly doctors’ and municipal congresses. […]

“Doctor and businessman, did we say? To prove it, let us simply mention that Urgel purchased  lots on chemin de la Montagne (Gamelin Blvd.) with some partners […] grouped together under the name Compagnie d’amusement. At the time there were only a few summer cottages on these woody and shaded properties. The present day des Oliviers Street was thus  named because of this  transaction concluded at the  the beginning of the twentieth century; in fact, the street  should have been called rue Olivier, which was the maiden of Mrs. Archambault.

“Since he was the son of a mayor – his father Damase-Eusèbe was mayor of Saint-Pierre-les-Becquets from 1876 to 1890 – grandson, on his mother’s side, of the MP for Nicolet, Antoine Prosper Méthot, and son-in-law of Senator L.-A. Olivier who represented the district of Lanaudière, it is not  surprising to see why  Urgel Archambault wanted to taste the drug that is politics, especially on a playground as vast as the third largest city of the Province of Québec. After having settled in, family wise and professionally, true to tradition, the 33 year-old doctor launched his political career.

“In 1911, Le Spectateur, a liberal newspaper, was very critical of his arrival on the political scene. When the doctor announced his candidacy for the mayor’s office (that everybody thought reserved to the promoters Bourque and Dupuis), the newspaper wrote that it was “a manoeuvre from the Tories… especially Dr. Aubry”. There was yet a bigger surprise to come: Urgel Archambault defeated his opponent Bourque, by 632 votes, a majority that was unprecedented in the history of municipal politics. His victory was attributed to the support of Mr. Dupuis “who, having desired the mayor seat for a long time, helped Mr. Archambault” and to the support he got from a few members of the clergy”.

“The two following years, his former ally, Hormidas Dupuis, made him taste the bitterness of defeat by being  elected mayor in 1912 and 1913, with 394 and 577 majorities, respectively. These consecutive defeats prompted Archambault to wait for the right time and he didn’t run in 1914. He was again a candidate in 1915, but lost to Bourque, who had been his opponent in 1911, by 108 votes.

“Urgel’s  persistence earned him the respect of the electorate and in 1916, he  was unanimously appointed mayor. He was then the leader of the Workers’ Association, who earned a big victory by successfully having all  its candidates elected.

“The population gave Urgel  a third mandate in 1918. This election was an animated affair, that could be called “the whisky election”. It opposed the prohibitionists and the anti-prohibitionists. The referendum on prohibition had taken place in the spring of 1917, and the following administration, who was elected in January 1918, had to bring into force the teetotaller decision of the Hullois. Helped by the newspaper Le Droit, whose directors were convinced that “the city had to be ridden of the devil alcohol” and  by curé Bernier who, up into the pulpit, described the desired candidate, Archambault defeated his opponent, lawyer Louis Cousineau, by 415 votes.

“After serving as mayor for two years, Urgel didn’t run again until 1928; he then lost badly to Théodore Lambert by 1387 votes, and that election marked  the end of his political career. […]

“His most important endeavours took place during his four year mandate, from 1916 to 1920. During that period,  he was the president of the subscription campaign “Victory bonds” in the Hull district as  well the host of the Prince of Wales in September 1919 and of the Governor General, the Duke of Devonshire, events he could be proud of. .But  his claim to fame was to be known as the mayor  who did the most to Frenchify Hull.

“Since 1909, the Chamber of Commerce had encouraged the municipal Council to modify the names of the streets that still bore English names. […]  In 1911, the municipal Council set up a special committee to revise the street names. Dr. Archambault became  a member of that committee on the recommendation  of the Chamber of Commerce. In its July 1912 report, the committee recommended that the name of 45 streets be changed, 10 of them as soon as 1912. The change was supposed to happen gradually, but it’s only four years later, once Dr. Archambault was back in the mayor’s chair, that a new committee changed the name of 69 streets, giving them names historically meaningful enough to commemorate the great names and great historical events of the French and English Regimes.

“The special interest that the mayor took to that cause is obvious. He was responsible for giving the name Olivier to the street crossing the one bearing his name. It wouldn’t be far fetched to suppose that the Lanaudière Street in Val-Tétreau (name of the district where his father-in-law was Senator), and Nicolet Street in Wrightville (name of the county that his grand-father represented in Parliament), owe him their names also. […]

“The support that the Workers’ Association granted him in 1916 incited him to approach the provincial government in March 1919 for the construction of the École technique (Technical School). Sign of the mayor’s  tenacity, these steps followed those he had made in June 1916 with the spokesperson of the Workers’ Association, Achille Morin and  led to the foundation of the school in 1924, at a time when ironically Hull experimented a decline in its industrial calling. The Hullois owe him the École technique.

Although not completed during his mandate, it was founded thanks to his work and that of Achille Morin. […]

“This article only skims over the character that was Dr. Archambault;  we hope it will encourage others to write  more in-depth texts on our regional history. At the very least, people from Hull will now know why  there is a street called Archambault in their city”

Translation of excerpts from the magazine Asticou, cahier no 29, December 1983, p. 3-9. The original text in French was reviewed and proofread by the author in November 2007.