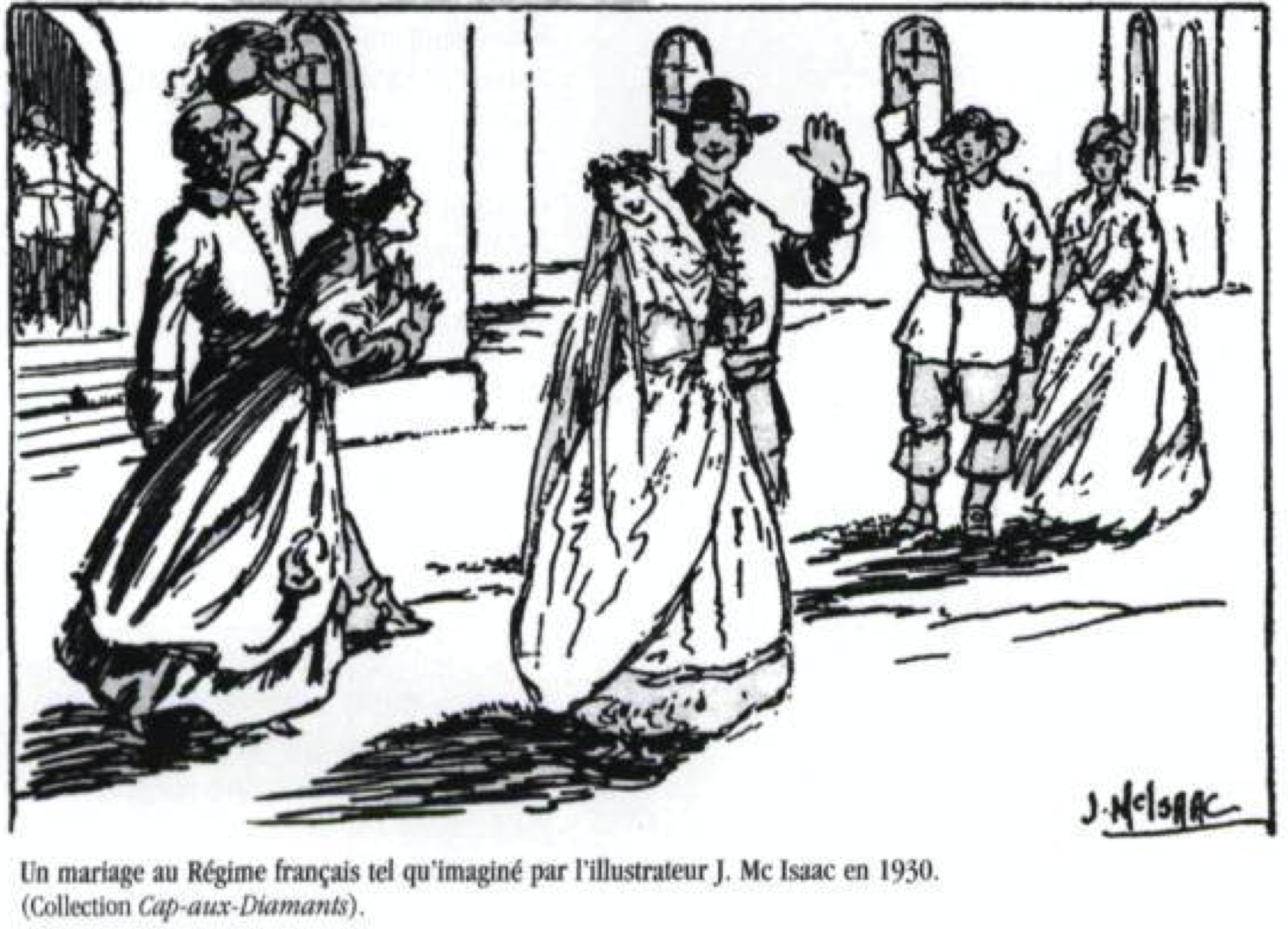 La Rochelle had been the hub of commerce between Nouvelle France and the Metropolis for many long years. This port had been the place where a large number of colonists left for America aboard ships loaded with objects and produce of which would become their supplies upon setting foot on land in Québec.

In the 17th and 18th century, men, women and children had passed their time as best as they could while they waited to embark at La Rochelle. The departure would then occur if the wind permitted it, and if the captain judged that the vessel was sufficiently loaded. For certain people, the delays that prolonged for several weeks had turned out to be catastrophic. People would go into debt to live in poor hotels or had to pawn their meagre possessions after having spent all of their money.

The people from La Rochelle that can boast of having sent the most colonists to Canada were unquestionably right. It is true that people would come from all parts of France to embark for the destination to America. One researcher had picked the names of 600 people, originating for the most part, from La Rochelle or from the nearest vicinities.

It would sometimes happen that one had been obliged to sell their goods or to give them up as soon as one had decided to leave for the New World. Some would leave with their women and their children, and the majority of others would leave alone and, once well established, would send for their family to come. Some people would neglect even to send for them, and would remarry in Nouvelle France. Whence had begun accusations of bigamy.

Having had the difficulty of communication between France and its’ Canadian colony, one must admit that the occasion for an adventurous colonist to commit bigamy was almost nearly ideal. Nevertheless, we find a few cases of bigamy in the judicial files of the era and it is necessary to believe that the married men who crossed the ocean and left their wives behind in France were very good men. Or, perhaps they only had tried to find the means not to be discovered.

The very first case of the judicial files of Ville-Marie, in 1651, is the one of Michel Chauvin dit Saint-Suzanne.

He only had to explain his behavior in front of Mr. de Maisonneuve and Father Claude Pijart, but he had preferred to run away and to return to France. He had married Anne Archambault, the daughter of the ancestor Jacques, three years previously.

Everything was going well for the couple until the day when Louis Prud’ homme had returned from a trip from France. Then he had told the clerk of the court the surprising piece of news of his discovery.

“Having had come from La Flèche, Anjou, a man who had stopped to address me asked me for the news on Michel Chauvin. What he said to him was that he was well and that he had married in Montréal. This man had answered by saying he was a terrible man since before Chauvin had left for Nouvelle France he had married his German cousin who was still alive and was doing well”.

What unfortunate discovery for Chauvin! … His recent wife has already given birth to a child named Paul whom had died at the age of seven months. She had been pregnant at the time the drama exploded. The court had condemned the bigamist for about 760 pounds for his Canadian wife, Anne Archambault.

A similar case had occurred in 1664 and the Sovereign Council had ordered the arrest of a miller, Pierre Bissonnet to answer to the charges made against him for having been married in Montréal while he was already married in France.

Pierre Bissonnet had crossed the ocean later in 1658; he had rented a farm from the company of Montréal on December 20th, 1658 then he had rented a second one on August 21, 1661 from Gilles Lauzon, the spouse of Marie-Anne Archambault, sister of Anne who had married the bigamist Chauvin.

Bissonnet had not shy away with his discretion, because about 1659, he had told that he had married in France, eleven years previously but he had lived only one month with his wife and had left her because she had the name of being a witch.

On April 24, 1660, the marriage contract of Mathurine Desbordes and Pierre Bissonnet had been signed, and the marriage had been held on May 03, 1660 in Montréal. Then another colonist who had known Bissonnet had arrived, and he had been shocked to find him married since he already had a wife in France. This piece of news had traveled like a train of powder, and the bigamist had been accused.

If bigamy had been known since 1661, on Wednesday, September 03, 1664, the king’s prosecutor had referred the matter to the Sovereign Council which had ordered to arrest the said Bissonnet and to have him held prisoner in the royal prisons.

In spite of the severities of the law, if he had been in prison, it had not been for a long time. Be that as it may be, Pierre Bissonnet had married Marie Dallon, a king’s daughter on October 9, 1668.

Pierre Piché was a bigamist without knowing it1

The third bigamist was for him the knowledge of not knowing and had demonstrated a sensibility of extreme consciousness when one had informed him about it. Pierre Piché dit Lamusette had been in Canada since 1662 when he received a letter of his brother, Louis of France, announcing the death of his wife. Marie Lefebvre. Following this news, the applicant had married Catherine Durand in 1665, and they had eight children.

In 1671, Piché had learnt from a man who had just arrived from France the disconcerting news that his wife Lefebvre was still very much alive. He had consulted the bishop, who, on the point of leaving for France, had promised to inquire about this situation. The bad news having been confirmed, Piché had obtained a leave and had returned to France where he found his first wife. According to the advice of the Bishop, he had embarked to return to Canada with the dite Lefebvre on the ship vessel La Nouvelle-France, but she had died at sea.

By arriving to Canada, he had resumed the common life with Catherine Durand “with the authority of the church” and so his marriage with her had been rehabilitated on September, 1673.