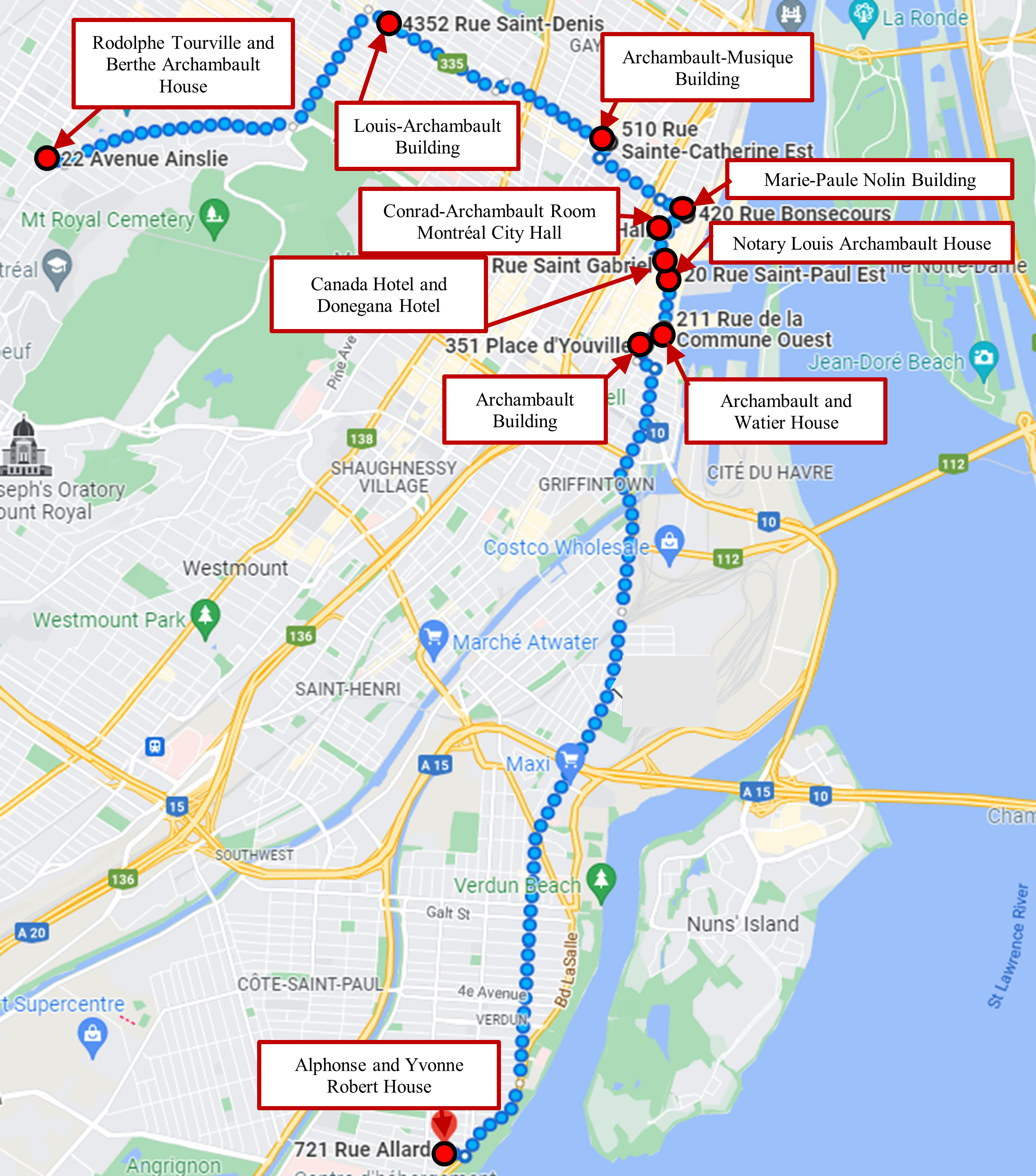 In this issue you will discover buildings, houses and places in and around Old Montréal that refer to descendants of Jacques Archambault.
It’s up to you to follow in their footsteps with the help of this map.

Archambault Houses and Buildings in Montréal 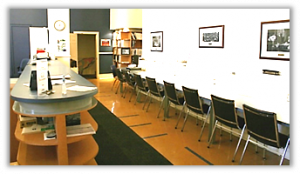 In 1938 the city of Montréal adopted the current version of its coat of arms modified by their chief archivist Conrad Archambault, in order to make them conform to the rules of heraldry.

This consultation room is a site entirely devoted to the historical archives of the City of Montréal. It is in this room that the contract for the first well in Ville-Marie, dug by our ancestor Jacques Archambault in 1658, was preciously preserved. 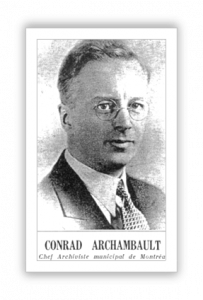 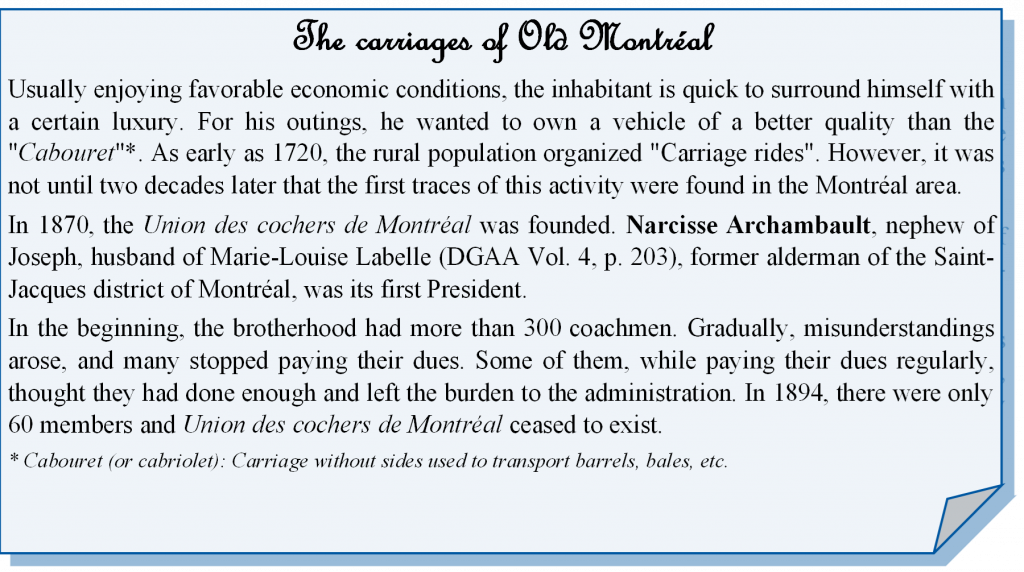 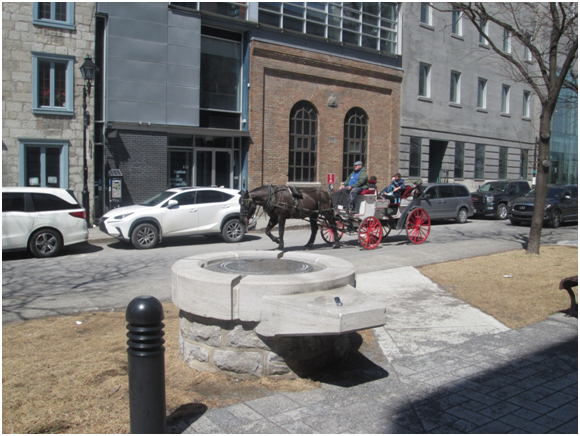 In the forefront of the photo, a replica of the well dug in 1658 by our ancestor Jacques Archambault,
inaugurated in front of some 250 of his descendants on October 20th, 1984.
Photo Pierre Archambault 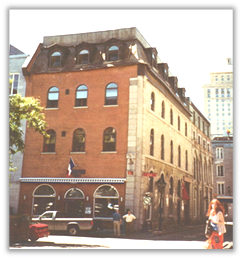 The doors and windows had been modified in 1950, and the front on place D’Youville does not have its original aspect since it had received a new brick facing.

The Archambault’s building is situated next to the museum of Pointe-à-Callière, near a reproduction of the well dug in autumn of 1658 by our ancestor Jacques Archambault.

The Archambault and Watier house 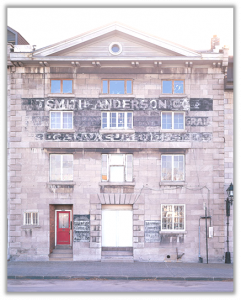 This building which is situated at 211, rue de la Commune West counts five levels and constitutes the wing which had a set of three warehouses. Thanks to the newly redone quays, the warehouse had participated very well in the trade of import-export.

“The trade of hay and cereal in the 19th century had been undoubtedly the most important one in Montréal.

The Archambault and Watier house, was one of the most considerable types and the business big warehouse of 100 feet by 75 had been situated at 165 de la Commune Street West. The orders of importation and exportation had been regular and had always been filled according to the most reasonable terms”. 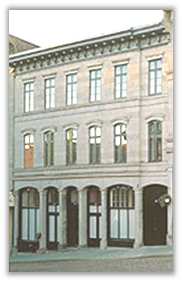 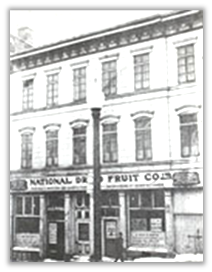 This house/shop had been built in 1863-1864 for Miss Jane Tate on the land which had belonged to her since 1856. The three-storied stoned building had two commercial premises on the first floor and some apartments on the remaining floors .

The nearness of the Bonsecours market and Jacques-Cartier’s place had seemed to direct the vocation of the building because many of their occupants had been associated with the food’s section. By 1940, the National Dried Fruit Co had settled in the building and had occupied all the first floor until the arrival, in 1963, of the studios of the high fashion of Marie-Paule Archambault Nolin, (1908-1987) daughter of Charles Auguste and Anna Beaudry, whom had been considered to be “the great lady of the Montréal’s high fashion.”

The house of the Notary Louis Archambault 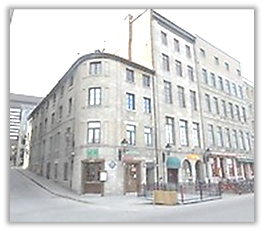 On October 9, 1876, Louis Archambault, the Notary and Legislative Adviser had acquired a three-stories building at 20 Saint-Paul Street East with an important difference in the level between the facade of Saint-Paul Street and the one of the De la Commune Street.

The Doctor Archibald Hall had the building constructed in 1846. During the crisis at the end of 1840, Hall had found it difficult to find an occupant for the main store. He had rented it later to a pianoforte. Putting this trade on the side he had then found a shoemaker, the Shakespeare Club from 1847 till 1848 a wholesaler of cloths and articles of haberdashery. The vocation of the building had changed several times.

Louis Archambault had died in L’Assomption in 1890 and the succession had become the owner of the building until June 7, 1945. 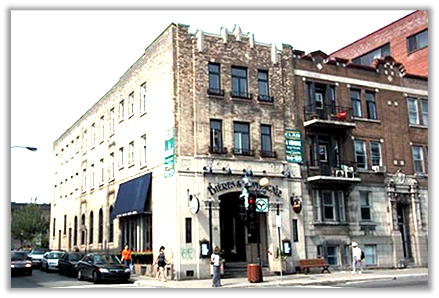 Photo: City of Montréal Photographic Center
It is engraved on the carved stone of the building
« Édifice Louis-Archambault, Société des artisans canadiens-français » 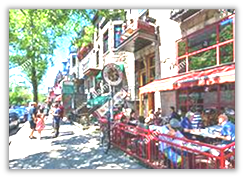 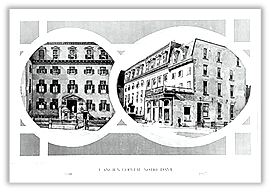 To the left, Hotel du Canada, from an 1872 engraving
Corner of Sainte-Thérèse and Saint-Gabriel St., Montréal

The Hôtel du Canada, Montréal’s most exclusive was administered by the hotelier, Angélique Archambault, born in Pointe-aux-Trembles, Montréal on October 18, 1812, daughter of Jean-Baptiste Archambault and Thérèse Archambault.

As one of the most prestigious clients of the Grand Hôtel of Angélique, history records the names of Prince Jérôme Napoléon, brother of Napoléon 1st‘s younger brother, who came down in 1861.

The chronicle of the time bears witnesses to the success and prosperity of the establishment in the years that followed. In particular, it was noted “that he was furnished with luxury and that his table had a great name. We went there for fun, many banquets and even balls…”

Burned down in 1849, a second establishment will bear the name of Hôtel Donegana, on Notre-Dame Street corner of Bonsecours Street, Montréal, which is transformed into a “hotel for the sick”, now Notre-Dame Hospital moved into the current building on Sherbrooke Street. 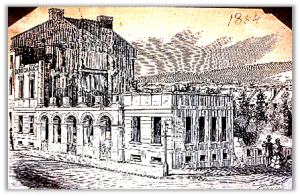 The house of Alphonse and Yvonne Robert 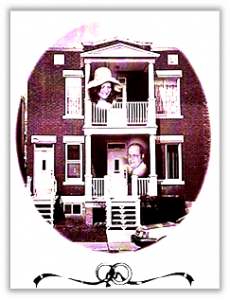 Inset at the bottom, Pierre, archivist of the Association des Archambault
d’Amérique and at the top inset, his wife Nicole, formerly next door at 723.

Built in 1929, the six children of Alphonse and Yvonne lived in this house. It was sold in 1977 following the death of Yvonne, a widow. 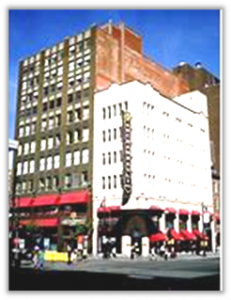 Enterprise founded in 1896 in Montréal by Edmond Archambault, son of Zéphirin and Marie Délima Archambault of Saint-Paul-l’Ermite (Lanaudière, Québec).

Music shop keeper, lucky in business, he sells scores, pianos, organs and violins. His business is flourishing during the first thirty years of the nineteen century, so good that in 1928, Edmond order from the Engineer Gaspard Archambault a seven-story building, Art Deco style, where he moved in 1930. This very building is still under the name Archambault-Musique, corner of Sainte-Catherine St and Berri St in Montréal. 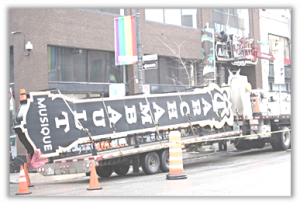 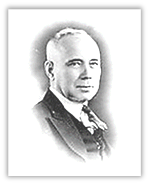 The house of Rodolphe Tourville and
Berthe Archambault in Outremont 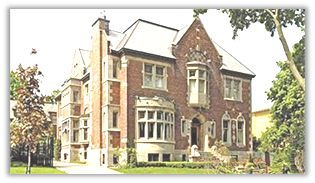 Rodolphe had one of the most imposing residences in Outremont built in 1914, located at 22,  Ainslie Avenue. With its slate roof and its cladding in pecked iron oxide brick and limestone, its style is bursting as it borrows as much from that of the English Renaissance as from those of the Tudor and Edwardian styles with a touch Arts & Crafts. Architecture specialists call it Free Style.

With 20 rooms, as well as a detached outbuilding where a garage and a two-and-a-half-room apartment are housed, the interior has been designed to ensure the comfort of its owner, the rooms on the front and on the left side being reserved for the family while the western part was for the use of servants.

At the entrance, the visitor finds himself in a very large hall divided in two by a triple arch in dark oak in the Tudor style. A fireplace was inserted into the wall beyond the arch. The monumental staircase leading to the upper floor is also in oak and in the same style. A glass roof where we can see crests, commemorating the fourth centenary of the discovery of Canada by Jacques-Cartier (1534-1934) disperses a muffled light.

A hallway leads to the dining room and the main living room. The dining room is magnificent with its mahogany paneling, its coffered ceiling inlaid with plaster patterns and its sliding door with beveled glass that opens onto a living room, formerly the solarium. The period carpet (1930) has been preserved.

The Georgian-style living room with sumptuous oak paneling has a gas-fired fireplace surrounded by windows decorated with escutcheon stained-glass, a huge rosette on the ceiling and a small nook with a bench seat with carved wooden corners ( cozy corner) which has the most beautiful effect.

Another smaller French-style living room with its fake electric fireplace and magnificent decorated plaster ceiling was formerly reserved for ladies.

At the back, the old solarium has been replaced by a living room, but the fireplace, the paneled walls and the original stained-glass windows have been preserved. Upstairs, five good-sized bedrooms open onto a hall where there is a magnificent, sculpted table whose feet represent characters. This table had been left by the original owner. In the basement, there is a large living room, a billiard room, the laundry room and the boiler room.