This map shows where these houses were, and for many of them, are still located.

In this issue, you will go through Wisconsin, New England, Illinois and Missouri

According to the “Old USA City Directories” from 1897 to 1921, two Archambault were registered in Racine, Wisconsin; Edward and Joseph, shoemakers; one in Shelburne, Vermont, Harry Archambault, captain of the Well’s yacht; six in Claremont, New Hampshire; six in Central Falls, Rhode Island; one in Newport, Rhode Island and Joseph in St. Louis, Missouri.

The blue, white, and red symbolize the United States of America. The Star symbolizes Franco-American unity and belonging to the United States. The fleur-de-lis on the right is a reminder of the French Canadian people or of France for those of French origin.

The Albion House in Chippewa, Wisconsin
and the Commercial Hotel (Ottawa House) in Boyd, Wisconsin

While still operating the Albion House or earlier name Riverside Hotel in Chippewa Falls, WI, where his son was born (Eugène J.), Eugène A. built and started the Commercial Hotel in Boyd, WI. See reference from Boyd Historical and Chippewa Falls, Wisconsin USA- Historical Society Records. He built and opened it thinking the railroad would build a major depot there. That never happened. It is also believed that his wife Philomène, born in 1859, became ill with tuberculosis. He then sold the building and moved to Eau Claire, WI for medical reasons. Philomène died in Milwaukee, WI, on March 1, 1954. Philomène and Eugène had been married in 1879.

Albion House 101 Bay Street, Chippewa Falls, Wisconsin, was on the corner of River Road. It was a boarding house, saloon and residence. Later it became the Mason Shoe Factory. The historic house is now a downtown apartment complex. 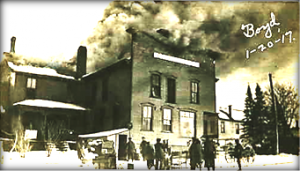 While managing the Albion House in Chippewa Falls, Eugene built the Commercial Hotel which burned down in 1917 and was rebuilt and sold as the Ottawa House.

The house of Ambrose Shambeau (Archambault)
in Ogdensburg, Wisconsin

Below is the first house of Ambrose and Lily Fenno, still in good condition, after renovation around 1860

The house of Éliza Shambeau and Ernst Schmidt
in Sheboygan, Wisconsin 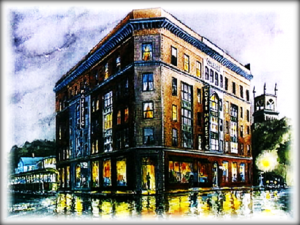 The Majestic Theater, owned by Joseph Archambault, located in West Warwick, Rhode Island, was surely, at one time, the main community theater in the area. It was part of a large commercial building called Majestic Building. It opened during the silent film era. It closed its doors and remained closed for several decades until the building was completely demolished in the late 1990s.

The nearby St. John’s Church was a kind of French-American social hall, created in 1909 by a Father Bourgeois. It was to represent French culture, a small performing arts center as well as a concert and lecture hall.

The building of Lucien Archambeault
in Arctic Center, Rhode Island

On November 3, 1909 a fire started in the shoeshine parlor of the Archambeault block. By the next day the entire Archambeault building was totally destroyed at a loss of $17,000. Shortly afterwards his brother Joseph Archambeault began construction of the new building and he called it the Majestic Hotel and another business was also located into the building.

Lucien is the son of Paul and Marie Ménard. One of his sons, Albéric-Amédée, a Supreme Court judge of Rhode Island, United States, had been the first Senator elected for the new town of West Warwick.

The house of Robert,
in Enosburg Falls, Vermont

Archambault Farms is the largest dairy farm in the region. It is located at 3082 Route 105, Enosburg Falls, Vermont. 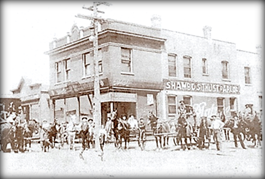 In cattle country, cowboys were kings. Riding 18 hours a day, they had to guard and protect the large herds from Indians and rustlers. At the end of each month, they gathered and spent their meager $25 wages at the saloons. The saloon was on the first floor and the dance hall on the second floor.

After the sale of the Trust Parlor, Joseph-Napoleon settled on a farm in Baldwin, Spanish Fort, Alabama.

The house of Auguste,
in Florissant, Missouri 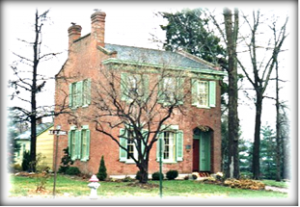 The Archambault House, with some late Victorian details, was built around 1850 by Auguste, husband of Amanda Perry (Peira), son of Pierre and Josephte Foucher, of Saint-Roch-de-l’Achigan (Lanaudière, Québec).

Acquired in 1969 by the City of Florissant, the Archambault House was renovated by the Local History Society in 1973. It is one of the few houses in the city to have survived the 19th century. The interior decorations have been reconstructed as authentically as possible. Some of the furniture belonged to the Archambault family.

The Archambault House at 603 Saint-Denis Street, is one of the houses listed for preservation in Florissant.