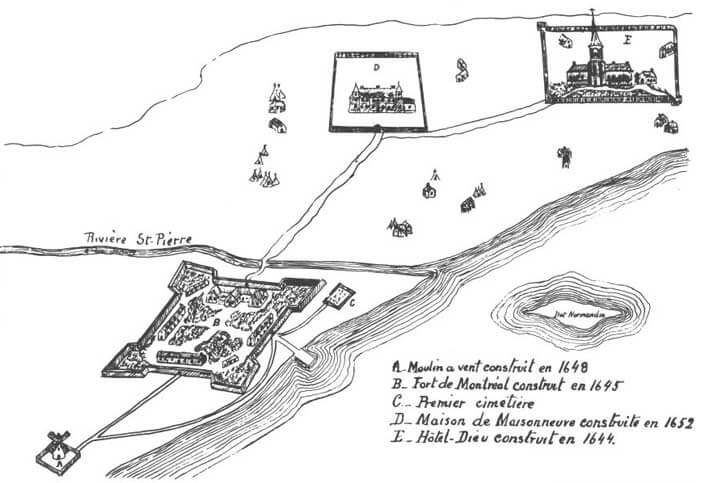 “On February 15, 1688, was buried Jacques Archambault, 84 years old, in the cemetery after having received all the sacrements. E. Guyotte, priest.” This is the laconic inscription that we can read in the register of the NotreDame Parish in Montréal. “In the cemetery…” Which one is it, and where is it? From 1643 to 1688, that is 45 years, is recorded the existence of five cemeteries1.

The first one was established within the walls of the fort. It was located at the extremity of the headland formed by the Saint-Laurent and the small river Saint-Pierre, where we can find the reproduction of the well dug in 1658 by our Ancestor.

Because the Saint-Laurent would flood the ground every Spring, the inhabitants has to find another location for the burials. In 1654, they opened a new cemetery in the gardens of the Hôtel-Dieu Hospital, at the corner of the streets SaintPaul and Saint-Joseph (today North-East of Saint-Paul and Saint-Sulpice). It was very convenient as the chapel of the hospital served as the parish church at that time.

The ground surely being too small at a certain point, the gardens of the Hôtel-Dieu Hospital served no longer as a cemetery. At an unknown date (but before 1673), a new cemetery of 26 toises by 15 (1 toise = 6 feet) was used at Saint-Paul Street, between the lands of Robert Cavalier, Aubuchon and Boucher. In 1674, money was raised by public donations in order to surround the cemetery with a fence to protect it from wild animals trespassing.

Once again swept by the necropolis rage the then called “Montréalistes” wanted a new cemetery. Was bought the land of Jean Desroches. It was located, it is thought, just South of the new parisk church, on Saint-Joseph Street (today bearing the name Saint-Sulpice Street). It had served as a burial ground since 1680.

Nevertheless, to complicate things even more, another cemetery is shown on the city maps, from 1685 on. It was located on the North-East of Saint-Laurent and Saint-François-Xavier streets, just beside the door that led to the chemin de la Montagne (way to the mountain).

Consequently, this little research does not allow us to say with any degree of certainty where Jacques Archambault was buried, on February 15, 1688. One does wonder why our ancestors, in one hundred years, never seemed to choose a large enough land to bury the dead even though they had the whole island to themselves.

Five cemeteries in 45 years is quite a lot!

This is not all. We mentioned only the cemeteries used until 1688, but there were at least six more until 1855, year that the fabric of Notre-Dame opened the Côte-des-Neiges cemetery.

Did you know that…

… Étienne Guyotte, the priest of Saint-Sulpice, curator of Ville-Marie signed the death certificate of Jacques Archambault on February 15, 1688. “I would have liked to have seen more than one signature for an ancestor of this quality. Françoise Tourault and Jacques Archambault have always lived among us like the stars in the sky because of their numerous descendants”.

… Before his death and after having spent some 42 years in Nouvelle-France, Jacques Archambault had lived to know 52 grandchildren and 12 great-grandchildren. In 1688, Ville-Marie had 800 people in population, so it means that one person out of fifteen was a descendant of our Ancestor.