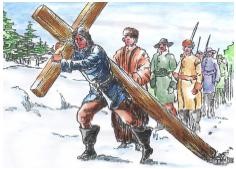 In the month of December 1642, all at once the Saint-Laurent River had overflowed, suddenly threatening to engulf the Fort of Ville-Marie. Mr. de Maisonneuve, founder of Montréal, had promised to carry a cross alone to the summit of the mountain, and to plant it there if God would protect the establishment from the flood. During the night of December 25th, time after time the water had pushed huge waves that had soon filled the ditches in the fort, and it had seemed to want to dragged everything down, suddenly it had stopped at the threshold of the door, and then it had receded.

On January 6th, 1643, the day of the Twelfth Night, everything had been ready, and the cross had been solemnly blessed. The procession had started; Mr. de Maisonneuve had placed the heavy cross on his shoulders, and had carried it alone, the space of a league. When the cross had been in place, a holy mass had been celebrated.

This cross, containing invaluable relics, had become the object of pious pilgrimages.

The new cross had been well respected and venerated until the captivity of the colony by the English in 1760. It had disappeared since then.

The Société Saint-Jean-Baptiste de Montréal had revived the souvenir of this cross. With a popular donation, a cross of 100 feet high had been erected on the summit of Mont Royal. This cross had been brilliantly illuminated for the first time during the night of December 24th, 1925. Since then, every night it glows during the night to remind the Canadians the sublime gesture of Maisonneuve1.

The water had receded without causing any damages to the Fort of Ville-Marie. On October 11th, 1658, 16 years later, Mr. de Maisonneuve had a well of 5 feet in diameter dug in the fort by our ancestor Jacques Archambault.

350 years later, in 2008, this anniversary was celebrated by the Archambault Association which also celebrated its 25th anniversary.