Moving and the transportation of buildings 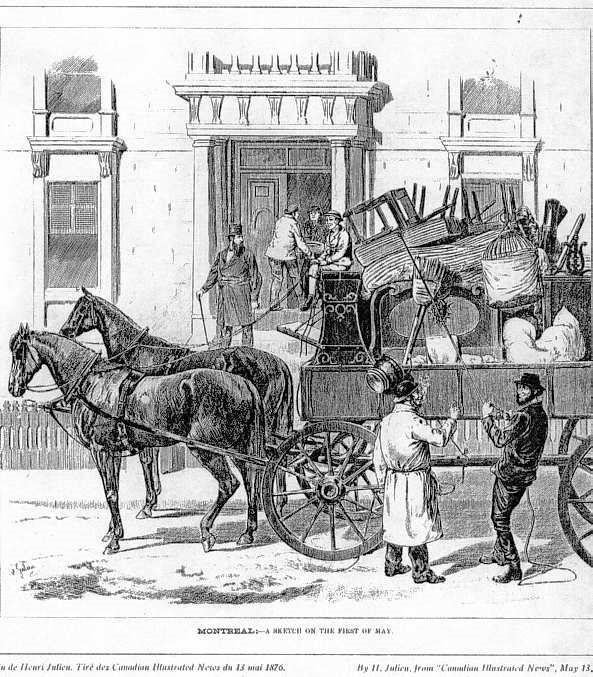 During the 17th & 18th Century, people would rarely move, except at times for weddings, or the death of someone close. People would live in the family house where everyone grew up together until death.

When a move was necessary due to exceptional reasons, the family and neighbours would come and offer their services and in no time the job was done with little effort and at no cost. Afterwards there was an improvised party to mark the occasion organized by those who participated in the task. Today’s, professional movers pack and move to places regardless of distances.

During the early years of the colony the houses were little and un-solid, made of wood with no subdivisions, and of simple assembly of interlocking logs. They could be disassembled quite easily, which would make their transport quite easy and with little equipment. This was the case on March 11, 1681 when Mr. Lamothe “promises and agrees to move and drag the house and barn” of Urbain Tessier, husband of Marie Archambault, daughter of our ancestor and to reassemble them on their land, for the sum of 20 pounds[1]. Transportation of houses goes a good while back.

In 1936, Léonidas Archambault, son of Hermas and Arline Guertin bought a house in Saint-Denis, and decided to move it to Saint-Antoine for his son Léo, who was getting married. When winter arrived four horses were harnessed and hitched up to the house, which was mounted on three sleighs, all of which attached to pulleys and cables held by teams of strong men. However, the slopes were quite steep near Saint-Denis, and near the village the house on the sleighs began to pick up speed while going down the hill, the men had difficulty holding on.

Although the terrain in Saint-Antoine was more level, one of the sleighs became damaged after hitting the stone dock and the house slid into the river. After the sleigh was fixed four more horses were needed to rescue the house from the frozen river. Needless to say, the whole village attended the spectacle[2].

From Montreal to James Bay

During the construction of the James Bay hydro-electric project around 1975, a multitude of contracts were given to private enterprise for the construction of roads, airports, dykes and houses. This was the case in a contract given to Mobile Home Transfer, whose proprietor was Paul Archambault, son of Engelbert and Margaret Daley[3].

This enterprise transported mobile homes, and towed the first modular building for the contractors at James Bay. Paul Archambault, retired and living in Lacolle in the Montérégie, also operated a company that rented tractor trailers which operated under the name of Les Locations Archambault.

From Trois-Pistoles to the village Le Bic.

Because of his ingenuity and his resourcefulness, Apollinaire Archambault son of Joseph and Victorine Ayotte[4], despite all the difficulties predictable and unpredictable of the enormous project, succeeded in moving his house from Trois-Pistoles to Bic, a distance of 60 kilometres.

Indeed, he used logs on which he rolled complete walls and parts of the roof of his house. The horses provided the power to move and to load the wagons with pieces of the disassembled house. Cables and pulleys channelled the energy and rendered the task easier for the men and for the horses.

Upon arrival at destination, that is to say the Bic “station”, they used the same strategy to drag the materials to the cap where it is definitely “anchored” since 1913 or 1914. Friends of the Bellavance family did the job of reconstruction. Today this house has celebrated it’s centenary. In August 2000, it was the subject of an article “Décor théâtral sur fond de tradition” in the magazine – Décormag Chez-Soi.

Apollinaire Archambault, is the grand-father of Roch, former Secretary of our association, and uncle of Camille, our President founder.