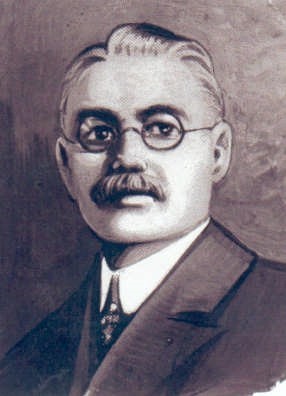 Son of François and Delphine Bouthillier, Adélard Archambault was born on April 24, 1860 in Saint-Paul-l’Ermite, (Lanaudière, Québec). He completed his classical course at L’Assomption College from which he graduated in 1885 with a Bachelor of Arts degree. He then immediately joined his parents in Holyoke (Mass.), where they had previously emigrated to some time ago.

After attending law school for 3 years, he was admitted to the Massachusetts Bar in 1888. He first practiced law in Holyoke, and in 1890 was admitted to the Rhode Island Bar, and he established himself in Woonsocket, where he remained until his death.

With Dr. Joseph Hills, his close friend, he took a very active part in the regrouping of our people either by founding or maintaining local French language societies. He was thus naturally attracted to political life. He chose the standard of the Democrats to which he never ceased to be faithful.

In 1901 and 1902, he served in the Rhode Island House of Representatives. In 1903, he was elected by a large majority as Lieutenant Governor of the State. In 1904, he ran again for this position, but the Democratic party was very weak in the state at the time, and he was not elected, although he received a significant number of votes. He then turned his attention to municipal politics and was elected Mayor of Woonsocket in 1906 and 1907.

In 1916, he returned to the Woonsocket City Council as Mayor for the third time, but in the fall of 1918, he did not run again.

During the four years he spent as Mayor, Mr. Archambault fought mainly to establish a basis for the distribution of taxes that was fairer and more in accordance with individual’s income.

Although a politician, Me Adélard Archambault never abandoned or neglected the practice of law. On the contrary, hard-working by nature, he always continued to study and keep abreast of all the new laws, which is why he was rightly considered an undisputed authority on civil law.

He was admitted to the Bar for the New England Federal Circuit and, in 1895, became a Commissioner of the Superior Court of the Province of Québec for the United States.

Devoted to his countrymen and a sincere believer in the spirit of association, he was a member of the Union Saint-Jean-Baptiste d’Amérique and the Franco-American Foresters.

When the latter society was founded in 1900, he was appointed Counselor-at-Law and was constantly re-elected to this position by the various successive General Boards[1].