Letter to the founders of Ville-Marie 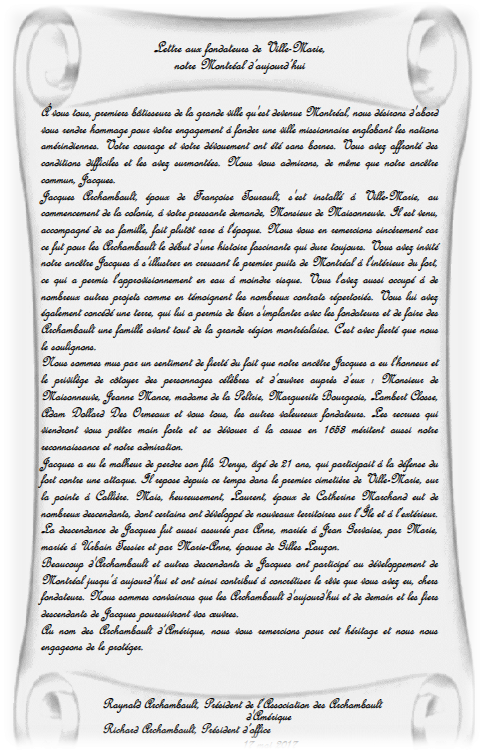 To all of you, the first builders of the great city that Montréal has become, we wish to pay tribute to your commitment to founding a missionary city that includes the Amerindian nations. Your courage and dedication were boundless. You faced difficult conditions and overcame them. We admire you and our common ancestor, Jacques.

Jacques Archambault, husband of Françoise Tourault, settled in Ville-Marie at the beginning of the colony, at your urgent request, Monsieur de Maisonneuve. He came, accompanied by his family, a rare occurrence at the time. We sincerely thank you for this because it was the beginning of a fascinating story for the Archambault family that has lasted ever since. You invited our ancestor Jacques to illustrate himself by digging the first well in Montréal inside the fort, which allowed for a safe water supply. You also kept him busy on many other projects as evidenced by the numerous contracts listed. You also granted him a piece of land, which allowed him to establish himself with the founders and to make the Archambault family first and foremost a family of the greater Montréal area. It is with pride that we underline this.

We are proud that our ancestor Jacques had the honor and privilege of working with famous people: Monsieur de Maisonneuve, Jeanne Mance, Madame de la Peltrie, Marguerite Bourgeois, Lambert Closse, Adam Dollard Des Ormeaux and all of you, the other valiant founders. The recruits who came to lend you a hand and devote themselves to the cause in 1653 also deserve our gratitude and admiration.

Jacques had the misfortune to lose his son Denys, 21 years old, who was participating in the defense of the fort against an attack. He has since been laid to rest in Ville-Marie’s first cemetery, on Pointe à Callière. Fortunately, Laurent, husband of Catherine Marchand, had many descendants, some of whom developed new territories on the island and beyond. Jacques’ descendants were also assured by Anne, married to Jean Gervaise, by Marie, married to Urbain Tessier and by Marie-Anne, married to Gilles Lauzon.

In the name of the Archambault d’Amérique, we thank you for this legacy and we pledge to protect it.