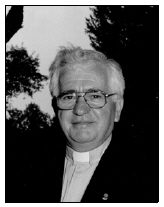 Priest of Society of the Holy Apostles

Born in Montréal-Nord on October 17, 1940, Father Yvon is the ninth of a family of ten children, headed by Sarah Bélanger ( from Saint-Paul l’Ermite) and Adélard Archambault

(from L’Épiphanie). He attended primary school near his home and then high school at  l’École supérieure Meilleur, in Montréal, which was  administered  by les Frères du Sacré-Coeur. While in high school, he wondered if he should become an accountant or a priest.

Supported by his family and a good friend, Yvon met Father Eusèbe Ménard, OFM, founder of the Society of the Holy Apostles, which was in charge of religious vocations amongst adults and young people. He then followed the classics stream at the Saint-Jean-Marie-Vianney College in Montréal, that was administered by the Society, and  undertook theology studies at the Grand Séminaire de Montréal. On May 19, 1968, Mgr Cimichella ordained him priest in the Chapel of the Saint-Jean-Marie-Vianney College. During his studies, Yvon fervently dreamt of becoming a missionary. His dream came true in August 1969 as he left Québec for Cameroun, in Africa. For nine years, he took care of the formation of priests to be. These years were spent in a joyful and sharing spirit as Yvon was discovering another culture as well as a young and promising Church.

This missionary experience prepared Father Yvon for a new mandate, back in Canada, in 1980: upon his return, he was elected Conseiller général. He then occupied, from 1984 to 1992, the position of Animateur général.

Followed a stay in Lima, Peru, where Father Yvon worked as a missionary again. The union of the two societies founded by Father Ménard forced him to come back to Montréal in 1995, sooner than he had planned. He was then elected Animateur général. His new responsibilities now give him the opportunity to visit his colleagues active in eight countries and to oversee the emergence of religious vocations and the formation of future priests. Father Yvon still hopes to work as a missionary after the end of his mandate, in 2005.