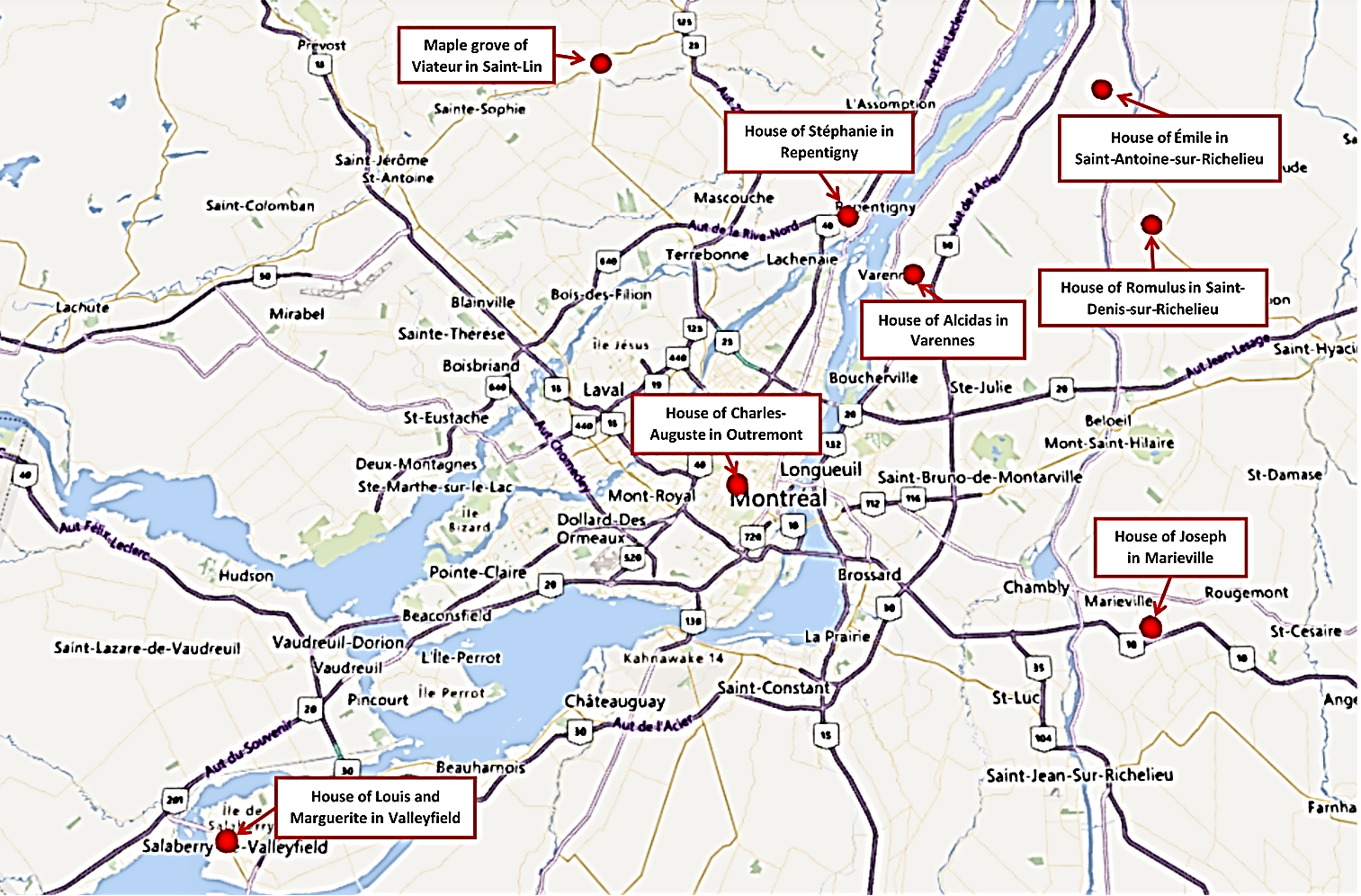 This is the first of the series. This map indicate the locations where these houses were, and for many of them still are, located.

In this first issue, you will travel through the Montérégie, Lanaudière and Montréal regions! 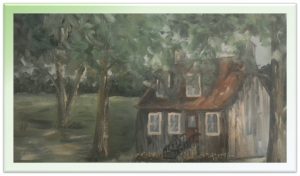 Oil on canvas of the House of Jacques Archambault (grandson of the ancestor), by Pauline Caron Archambault. It was located on Bellerive Drive at the corner of Mousseau Street in Montréal.

The house of Joseph,
in Marieville

This two storied red brick house and green roof is still around and it is now situated at the corner of Dr.-Poulin and Édouard-Guillet Streets.

Apollinaire, son of Joseph, his spouse Marie-Obéline Gagné dite Bellavance and their children have lived in this home before settling in Bas-Saint-Laurent around 1903.

The Allard house,
in Saint-Antoine-sur-Richelieu

This large stone house was built in 1835 by François Giard for Henry Allard. In 1840, François Maheu is the owner of the house. It seems that he bequeathed it in November 1878 to his daughter Alexandrine, wife of Joseph Blanchard. Their son Alcide inherited it in 1887, and lived there until 1922, when Émile Archambault bought the house.

The house at 866, rue du Rivage belonged later to Joseph Lajeunesse from 1932, and was bought by Arthur Bouvier in 1939. Bouvier donated it to the parish council of Sainte-Théodosie (Montérégie, Québec). Paul-Horace Archambault, husband of Jeanne Jacques1, acquired it in 1955 and lived there until 1979. Archambault was the mayor of Saint-Antoine-de-Padoue (village) (Montérégie, Québec) from 1965 to 1971. The house was bought back from the estate of Paul-Horace Archambault by M. J. Jacques in 1979, and was later sold to J.-Jules Archambault in 1987.

This Québec stone house is in the French style. It possesses the main characteristics of this model: chimney stacks in stone, on both sides of the house, symmetrical windows on the street side and veranda in the front. The front skylight is an original element, very rarely seen.

This is the former shed of the parish priest of Varennes where grain, fodder plants and other items were stored. The building dates from the beginning of the 19th century, according to inventory data. This shed was converted into a residence owned by Mr. Alcidas Archambault, the village notary, and then it became a multiple-unit residence.

The Notary Alcidas, born in Varennes on January 14, 1856, was the son of the 1857 patriot Joseph Napoléon Azarie and Archange Aurélie Mongeau.

The house of Romulus,
in Saint-Denis-sur-Richelieu 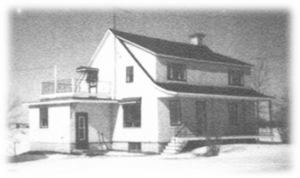 It had been one of the oldest houses of Saint-Denis-sur-Richelieu, Québec in 1990 until it had been destroyed by fire. According to the book of Saint-Denis-sur-Richelieu 1740-1990, Romulus, and his spouse Rose-Hélène Milette married on September 21, 1946 and their five sons had been the last ones of the ninth generation to live in this house. This brings us back to the couple Pierre Archambault and Marie Lacombe. (Fourth generation). 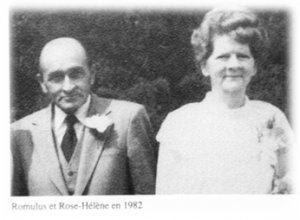 Born on September 22, 1877, Charles-Auguste Archambault, was admitted to the Bar of the Province of Québec in 1901 and received the Prince of Wales Prize. He practiced his profession for half a century in Montréal.

The Château of Valleyfield
Saint-Laurent St.

This fifty-room hotel, which had a dining room and a tavern area on the first floor, was the meeting place for business travelers and tourists and was burned down on January 12, 1944.

The Windsor Hotel of Valleyfield 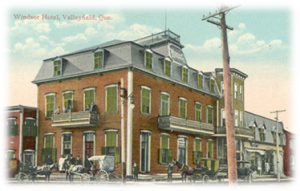 This Valleyfield hotel was run by Marie Archambault, daughter of Édouard and Célanise
Bourdon of Saint-Louis-de-Gonzague.

The maple grove of Viateur,
in Saint-Lin 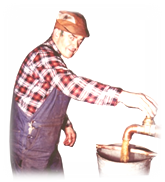 Son of Pierre, a farmer, and Parmélia Lapierre, Viateur was born on May 04, 1921 in Saint-Lin, he married Anna Archambault, daughter of Eugène and Emma Crépeau, on September 15, 1945 in this same town.

Viateur cultivated his land for many years. His work in the expansion and construction of buildings later led him to carpentry.

He acquired his maple grove in 1958, where he warmly welcomed members of the Archambault d’Amérique in April 1987 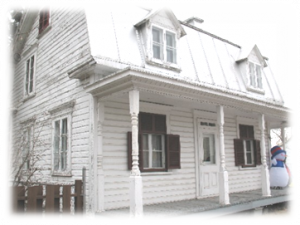 This house is presented without artifice and in a state of conservation worthy of mention. It is located at 341 Notre-Dame Street.

Its sloping roof is attached to a platform, and the slab-steeled metal sheet is of silvery color. This type of roof gives more space in the attic and often allows accommodating the numerous families at this time. Moreover several windows enlighten the space abundantly, and a smaller side opening allows even the attic to receive its share of light.

The term symmetry better characterizes the layout and the organization of the front. Both chimneys in its ridged configuration respond to both gabled panes and, these to the two windows of the first floor. Even the posts of the balcony with the same structure are divided to accommodate the facade. The central door welcomes the visitors, or when is opened on big days balances the set up.

The big wooden veranda with its turned posts follows the facade and stretches on the northeast side to reach the kitchen door. By turning the bend, it draws a graceful curve which contrasts with the lines that are part of the house.

This house had been built on this site at the beginning of the 20th century by Frédéric Béland, a day time laborer, and it had been sold by Louis Léveillé in favor of Marie Béland, the daughter of Frédéric.

In 1903, this property had passed into the hands of Méderic Foucher, a citizen, originated from L’Assomption, the spouse of Stéphanie Archambault of Saint-Paul-l’Ermite, the daughter of Jean-Baptiste and Charlotte Juneau-Latulippe1. Gérard Mathieu, a physician of Mascouche had acquired the property in October of 1941 that had been passed on to Arthur Lefebvre the same month.

In 1952, Fernand Laurier had become the owner, and he had sold it five years later to Émile Urbain which this family had occupied, and had conserved this house until lately.