An overview of our ancestor’s lineage 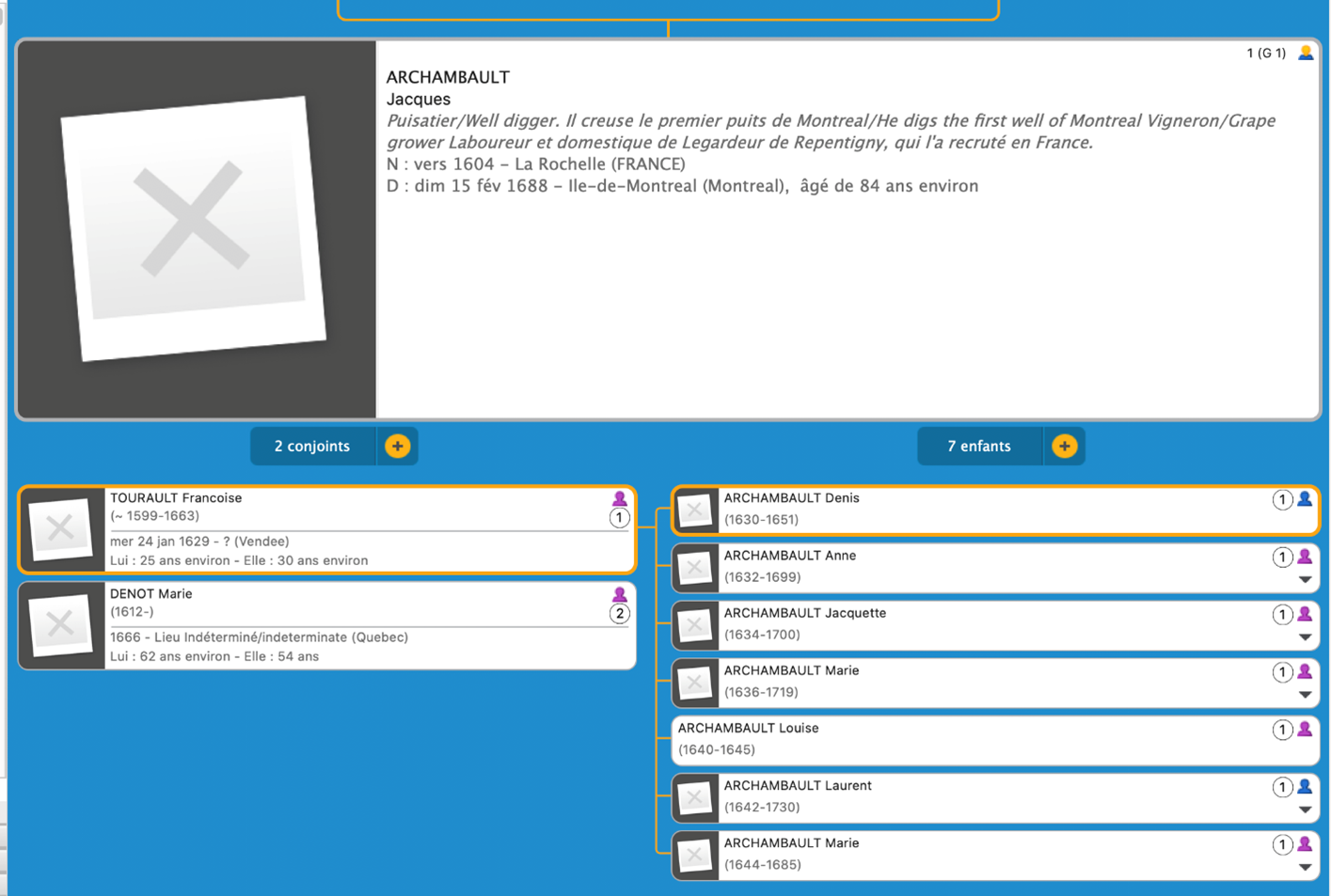 An overview of our ancestor’s lineage

Our newsletter continues to inform the readers about the ancestral couple and their descendants.

When Jacques Archambault, his wife Françoise Tourault, and their family, set foot in Québec City circa 1645, the eldest child, Denys, was 15 years old. Anne was 14, Jacquette, 13, Marie, 9, Laurent, 3, and Marie-Anne, one. It seems that their fifth child, Louise, had passed away before the family boarded the ship for the colony. All the children had been born in L’Ardillière and baptised at the Saint-Pierre-aux-Liens church of Dompierre-en-Aunis, today Dompierre-sur-Mer, in Charente-Maritime.

Denys was baptised on September 12, 1630. He died, without descendants in Montréal, on July 26, 1651, killed in the explosion of a cast-iron cannon that he was trying to ignite for the third time. He had just turned 20 years old.

Anne was born circa 1632. She married Michel Chauvin, called Sainte-Suzanne, on July 29, 1647, in Notre-Dame-de-Québec. They had two children: Paul,who died as an infant and Charlotte, who later married Jean Beaudoin  That marriage was later annulled because of Chauvin’s bigamy and Anne was married   in Montréal, on February 3, 1654, to Jehan GERVAISE (Gervais), who was from Souvigné (Indre-et-Loire). He had arrived in the colony as a member of the Great Recruitment of 1653. Anne gave birth to nine children who later married into GADOIS, LEFEBVRE, DUPUIS, PIGEON, PAYET, BOYER, PRUD’HOMME and CARON families. She died on July 29, 1699, in Montréal.

Jacquette was born circa 1634. She married at Notre-Dame-de-Québec, on September 28, 1648, Paul CHALIFOU (FOUR, FOUX) who was a Calvinist from Périgny, in Aunis. Eleven of their fourteen children later married brides or grooms bearing the names MARTIN, BADEAU, BIBEAU, BROSSEAU, NOLIN, LANGLOIS, VANDANDAIGUE, HUPPÉ, BOURBEAU, MAGNAN and NORMAND. Jacquette died in Québec City on December 17, 1700.

Marie was baptised on February 24, 1636, and married at Notre-Dame-de-Québec, on September 28, 1648  – the same day as her sister Jacquette – Urbain Tessier, called Lavigne, who was born in Château, in Anjou.

Marie-Anne, born circa 1638, married, in Montréal, on November 27, 1656, a coppersmith called Gilles Lauzon, who was from Caen, in Normandy. Lauzon had arrived, like his brother-in-law Gervaise, as a member of  the Great Recruitment on 1653. The couple had 13 children who later set up homes with the CORON, FORESTIER, BOULARD, DESMARES, SICARD, DESROCHES, QUENNEVILLE, COITOU, CHOQUET and GROU families. Marie-Anne was buried in Montréal, on August 8, 1685.

Laurent, baptised on January10, 1642, is the only one to have passed on his last name. He married, in Montréal, on January 7, 1660, Catherine Marchand who was from the faubourg Saint-Germain of Paris. Laurent was 18 years old. The couple’s children married into the COURTEMANCHE, AUBUCHON, DESROCHES, ADHÉMAR, LACOMBE, BEAUDRY and LEFEBVRE families. Laurent was put to rest on April 19, 1730 in Pointe-aux-Trembles. He was 88 years old.